Understanding what drives us

A deep dive on people’s motivational drives and behaviors.

The mystery of human behavior

If your workplace is anything like mine, it’s likely full of people having wildly different personalities. (Mine is also full of scooters, but that’s a story for another day.)

For example, you’ll regularly observe some co-workers who are naturally talkative and social. You can frequently find them in the common areas of your office talking up other employees.

“How was your weekend? Mine was awesome! I saw this movie set in the future but on another planet that was kind of like Earth but not really. Let me spend the next 12 minutes telling you all about it.”

Then there’s the set of co-workers who seem quite content to keep to themselves. They offer a quick and courteous greeting near the office coffee machine before stealing away back to the sanctuary of their desks. It’s not that they don’t like going to movies, they just don’t like talking to you about it. For literally 12 minutes.

Why do we behave as we do? That question has been the preoccupation of philosophers, psychologists, and researchers for millennia.

It turns out that knowing the specifics regarding key workplace-impacting drives can give us a sort of unfair competitive advantage. This all starts with understanding our own behavioral drives.

According to Trait Theory, a unique combination of genetic and environmental factors—think the classic Nature vs. Nurture debate—contribute to the development of our personalities. Traits are best-considered habits of behavior, thought patterns, and emotions. And a given trait produces a drive to behave in a certain way. These drives create a need, and we’re duly motivated to behave in a way that satisfies the associated need.

Consider what happens when you’re hungry; you find something to eat. Your survival drive creates a hunger need and thus the logical behavior of ordering a hoagie from your favorite sub shop.

It’s not all that different when it comes to personality traits. Consider our office example above as it relates to a drive for social interaction known as extraversion. Our chatty co-workers’ personalities have a great deal of this trait while our more reserved workmates’ personalities only have trace amounts of it.

We are what we are (for the most part)

Our behavioral traits tend to be relatively stable over time. If you’re in the social set, you’ll likely be social across a range of situations, and you probably have been for quite some time. Knowing our “behavioral patterns” provides us with a predictable range of behaviors that we can expect you to exhibit.

Trait theory goes on to posit that different configurations of these traits account for our unique personalities. Diverse personalities bumping into one another in a dynamic and complex work environment having millions of variables explains why human behavior can appear so mysterious at times. Like a co-worker who washes out a cereal bowl in the kitchen sink but not the spoon. Hmmm.

Bear in mind: None of these are value judgments. High extraversion people are not better than low extraversion people. Low formality isn’t better than high formality. Each person simply has a different personality configuration. Also, each of us has some factors that are relatively high and some factors that are relatively low. These all balance out to what’s known as our average expression of drives. This configuration explains why people act differently in certain situations.

Once you understand these factors, how they interact with one another, and how strong or weak each of these drives are in your co-workers, you’re well on your way to becoming a Jedi master of working well with others. The drive to have control over or make an impact on one’s environment.

A person with high dominance has many ideas and opinions, and he is eager to share them with those around him. They are hands-on and focused on producing results, valuing independence and autonomy above all. In most day-to-day situations, he will be competitive and will challenge himself and those around to put their ideas into action. He aggressively pursues his own goals.

The high-dominance employee is a “get-it-done” type of person, technically-oriented, preferring the world of things and facts rather than that of people and relationships. Naturally innovative and venturesome, he can be critical of the status quo and “the way it’s always been done.” This employee’s way is better. Just ask him.

In the extreme, a high-dominance worker will be fiercely individualistic. This may be exactly what’s needed in entrepreneurial, uncertain, or risky work roles. He is undaunted by criticism, although this can create a barrier to his accepting and acting on external feedback at times. His communication style can be sharp and direct. 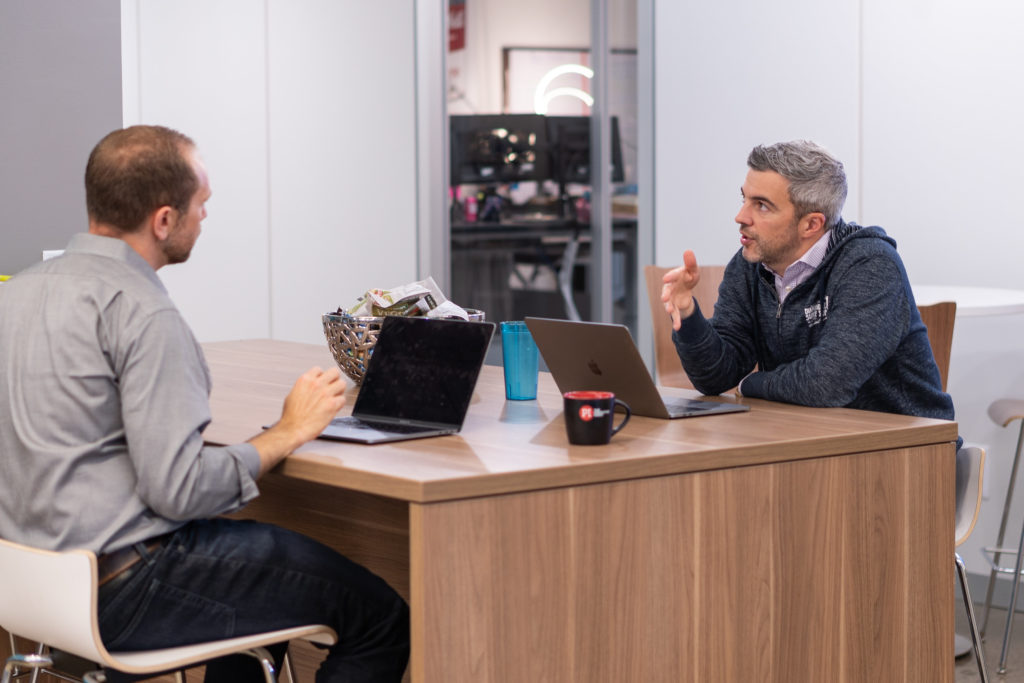 As the dominance drive is all about making an impact in one’s own way, it’s not surprising to learn that workers with a low amount of this drive are cooperative and accommodating by nature. Low-dominance co-workers are unselfish, and they’re quite willing to allow those around them to set the agenda. They readily accept the authority of others, including situations when directives are set by company policies, procedures, or systems.

Low-dominance co-workers are typically more interested in the team or group win. A “we” before “I” sort of thing. They don’t need the trappings of victories–public recognition or the best parking spot. What they do need is office harmony. Low-dominance workers are uncomfortable in the face of interpersonal conflict. They may attempt to defuse such a situation or try to bring balance in the pursuit of a general agreement.

Service-oriented, well-functioning, collaborative, and low-risk jobs are often a great match for low dominance employees. When taking up a leadership post, the low dominance supervisor will take extra care to make sure everybody is bought into the direction–not just because she says so. The drive for social interaction with other people.

An employee with high extraversion has a sincere interest in people. Interacting with others energizes the high-extraversion worker. She is approachable, smiles often, and is pleasant around others. She is usually cheerful and is a consummate team-first person.

An employee with low extraversion is not driven by a need for social interaction. By contrast, he will be quiet, non-communicative, and serious. Just because his mouth is shut doesn’t mean that his mind isn’t open, however. He’s introspective and enjoys private versus public spaces for thought. As he prioritizes tangible things over relationships, he is analytical and matter-of-fact in his interactions. When he does interact and communicate, he is thoughtful and sincere.

Many jobs are well-suited for low-extraversion employees. According to Jennifer Tenfelde, HR director at Polysciences, “We’re a science company filled with chemists and chemical engineers. [Low extraverted people] tend to thrive in our lab and other technical positions where they are typically working alone the majority of the time.” The drive for consistency and stability.

A high-patience employee is calm, stable, and steady. He’s unhurried in his work, and he’s content to perform routine tasks over a long period of time. He’s most comfortable with the familiar and accepts things exactly as they are. For this reason, consistency is key for the high-patience worker.

A high-patience employee will be methodical in his work. From a social perspective, his drive compels him to seek a type of familial relationship with co-workers. His are closely-knit bonds built over time and through regular interactions.

Change is of particular relevance—and consternation—to high-patience employees. In a business environment that can be tumultuous and chaotic at times, high-patience workers require special consideration. PI’s own Megan Holsinger, director of client success, advises that for high-patience workers, “change can happen, but in digestible amounts over time.”

A low-patience employee doesn’t have a need for stability and consistency; rather, for a low-patience person, variety is the spice of life. She will be restless and driving. She has a bias for action. She can be impatient and even intense at times; in fact, she might be guilty of taking a “ready, fire, aim” approach to getting things done. She is uncomfortable with the idea of being comfortable. She’d rather things be dynamic and fluid than stagnant and unchanging.

Everything about her is fast-paced—her thought patterns, her talk, her willingness to throw herself into action. During times of change, she will adjust quickly and happily. Anything that brings a little variety into the picture is a welcome part of her work. The drive to conform to rules and structure.

The high-formality employee takes a diligent and serious approach to her work. She is conscientious about getting things right, and this helps explain her emphasis on precision. She is well-organized and attentive to details.

In her view, whatever she does needs to be done right. She’s supremely motivated to produce error-free work and not to receive criticism or blame if things go wrong. As a result, she’s cautious and hesitant to take risks. She is a careful worker, and she has a strong reliance on conforming to whatever policies or rules have been established to govern how work should be done.

Reliable? Absolutely. A trailblazer? Not so much.

A low-formality employee is informal, casual, and spontaneous. He will be inherently flexible in his approach to nearly every project. He’s more concerned with the endgame—what results are achieved—rather than how the results are achieved. Those are concerns for somebody else, not him.

The low-formality worker isn’t shackled or obliged to adhere to established systems or policies. He feels no need to stick to the script; he operates best unscripted. He’s extremely tolerant of uncertainty. Not a worrier, he’s fine to “go with the flow.” He’s non-conforming and is all too happy to forge his own path forward.

How loosely you can structure the work to be done for a low formality worker is paramount. According to Tenfelde, “Low formality people thrive when there is a lack of structure, where there is more freedom and a need to be creative in the approach. They aren’t going to be bothered by it; they are going to like it.

The path to behavioral enlightenment

Really understanding, internalizing and adapting how you interact with people based on these four key behavioral drives will be a massive advantage for you throughout your career. Whether dealing with your boss, your peers, your direct reports, teams of people or the executives at your company, understanding what makes them tick will help you deal with them effectively. Everyone marches to the beat of a different drummer, and when you’re composing the music based on the beats they like most, you’ll be in high demand. That puts you in an exceptional position for career growth. And while social scientists have developed countless personality assessments for academic, clinical, and Buzzfeed entertainment purposes, The Predictive Index developed one of the first behavioral assessments specifically designed to measure and interpret behavioral preferences specific to the workplace.